It’s the end of October, y’all!

I say that with all the gratitude and love I can muster after a whirlwind of fall events and programs.

Surrounded by Chihuly glassworks in Tacoma 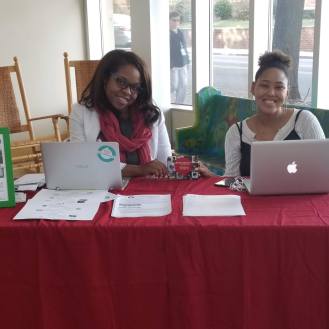 Working out of the Lobby of Levine Museum after our final On The Table CLT training.

I have travelled coast to coast programming and planning for social impact with museums, conferences, schools, nonprofits, and  individuals who are absolutely committed to manifesting change in their communities and beyond. We are purposeful and deliberate in our actions toward creating greater equity and we can’t stop now, as the holiday season approaches. There is no time to waste!

A few days ago we launched another large scale engagement effort in Charlotte resulting in thousands of  conversations geared toward action. I was very aware that we were broaching what is, for many people, a taboo subject in  a very public and forthright way. 6000+ people discussing the legacy of segregation in our community- it was decidedly ambitious and possibly inglorious if it went off the rails.

And we did it anyway.

It certainly hasn’t helped anyone in Charlotte to NOT talk about directly with historically accurate guidance. We provided a clearly written timeline, video testimonial from real Charlotteans, and  pages of guidance related to engaging across difference.

It was made possible through direct funding from the Knight Foundation and Foundation For The Carolinas, and most importantly by you. The energy to sustain and execute an initiative of this scale and level of engagement requires a fierce commitment to possibilities. Now, with two full nights of sleep and a lazy Sunday to reflect I can see three clear lessons from this work.

These statements are a form of misdirection-a deliberate derailing of necessary work-  to refocus on fear, ignorance, and refusal to recognize our current civil rights crisis.  What would it take to move people? Bombs, killings, voter suppression, church burnings? Are we reviewing our collective American crisis of 1965? No, all things we have witnessed firsthand in 2018.

3. People-loving Freedom is at the heart of liberation.

We don’t often situate our understanding of how to work with each other in freedom. Instead we look for ways to create  more control and less empathy.  This is a fallacy that grounds the majority of our interactions with each other. If we centered love for each other our decisions would look drastically different. Our collective shift would recognize humanity and emphasize our freedoms as shared, rather than exclusionary. Reparations require recognition of value. We start by seeing each other as all valuable.

The initial feedback we received from On The Table, while overwhelmingly positive, still helps us acknowledge that so much more is needed.

I deeply appreciate everyone who recognized their On The Table CLT experience as one part of a long tradition of disrupting our “Charlotte” way. Our national discourse on civility, does very little to teach skills around engaging each other and correcting injustice. Just talking cordially is just not enough to change reality.

Let’s move to action together.